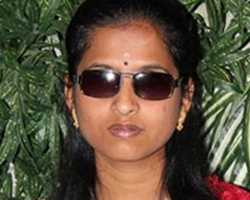 "Our disability should not become our weakness. Working hard until we reach our goals is the only way to make our dreams come true."

Ashwini is a person of indomitable spirit, advocating a cause that matters deeply to her. Born visually impaired in a small village in Karnataka, South India, Ashwini never allowed disability to mar the opportunities life gifted her. Instead, Ashwini’s parents ingrained in her a deep sense of moral empathy.

Ashwini graduated from Maharani’s College in Bangalore, eventually moving on to the corporate field. But Ashwini was never at peace there. Handling HR in the stuffy corporate world didn’t move her. She wanted to better human relations, especially the lives of visually impaired children.

Eventually, Ashwini left her day job. She joined Young Voices as their National Facilitator. This was Leonard Cheshire Disability’s campaign for young people with disabilities. That’s where her real calling began. Ashwini was among the seven young girls who were honored with the UN Special Envoy for Global Education's Youth Courage Award, part of the Malala Day celebrations in July 2013. A year later, she would start Belaku Academy - a free, residential school for visually impaired children from underprivileged backgrounds.

She was also among only three people from India to be honored with the Queen's Young Leader Award in 2015.

Belaku in Kannada means light. and Ashwini yearns to empower children with the light of education. “My ambition is to prove that visually challenged students are second to none,” she says.

Ashwini is married and lives in Bangalore. She spends most of her time working with the children and raising funds to build a bigger all-inclusive school.
PREVIOUS TEAM MEMBER NEXT TEAM MEMBER